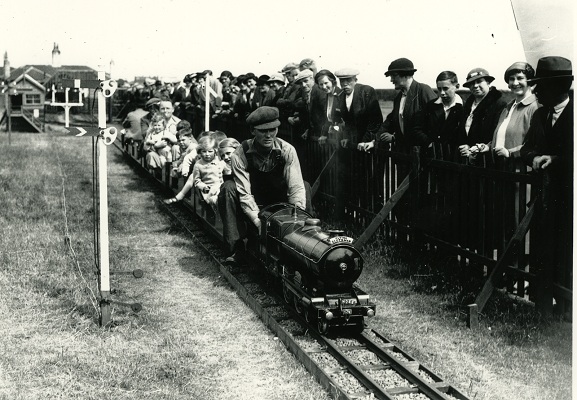 Kerr’s Miniature Railway first opened in Arbroath on 22nd June 1935 which makes it the oldest small-gauge railway in Scotland today.

Heartened by this early success, Matthew snr. lifted all the track over the 1935/36 winter months and relaid it to a more ambitious plan which included longer platforms, more sidings, turntables, miniature signal box and a new booking office. His efforts were instantly rewarded by the passenger total jumping as word spread throughout Scotland and beyond.

In 1937 passenger totals climbed again, so over the 1937/1938 winter months Matthew took the courageous step of lifting all the 7.25 inch gauge track and replacing it with 10.25 inch, which is still the gauge being used today. This naturally meant replacing the existing locomotives and rolling stock with wider gauge models. 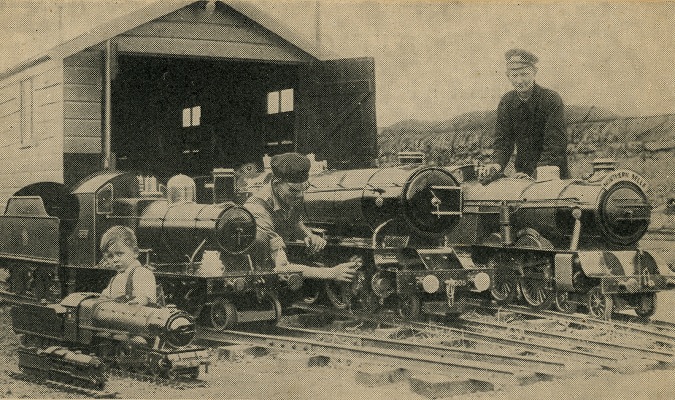 Although the war did not affect the railway much during 1939, problems with a boiler in one of the new locomotives reduced passenger numbers to a ‘mere’ 17,956!

By early the following year a Company of Polish soldiers had requisitioned the site to man a coastal defence battery placed in the park just outside the miniature railway fence. Fortunately Arbroath escaped lightly with just a couple of sporadic bombings, one of which targeted the tar-works further along Elliot beach, but caused little damage. 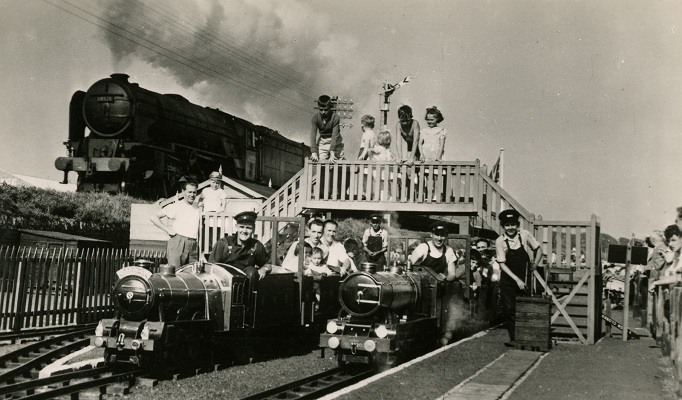 Immediately after the war, Matthew snr. returned to the railway full-time and began some ambitious changes. The line was extended and the track layout remodelled to A full sized A2 Pacific ‘Tudor Minstrel’ thunders past at the height of KMR’s popularity, in 1955 something resembling what you see today. The engine shed and turntable were both moved and an Anderson shelter put to good use as a tunnel, to add to the attraction and provide extra dry storage for the growing quantity of rolling stock. A battle with the town council over the lease charges briefly threatened the little railway’s existence in Arbroath, with Matthew snr. threatening to relocate to Carnoustie, Broughty Ferry or beyond. Eventually, however, the council backed down as they realised, possibly for the first time, that the railway was now a major tourist attraction for the town.

The wee railway continued from strength to strength, reaching its popularity peak when a staggering 60,000 people were hauled up and down the line during the summer months of 1955.

After 1955, things began to change for the wee railway. More people could afford motor cars and holidays abroad, so inevitably the crowds began to dwindle. Matthew Kerr snr. with the impressive 1946 line up. In the foreground a young Matt Kerr jnr.(present owner) Matthew snr. was now almost fifty and finding the live-steam operation more of a chore than a pleasure. So by 1960 the steam engines had been replaced by a refurbished ‘Auld Reekie’ and a massive battery-electric ‘diesel’ officially named ‘Prince Andrew’ but always referred to as ‘the Deltic’. Steam was now replaced at the wee railway by petrol engine and battery power.Matthew’s health and enthusiasm continued to decline over the next few years, no doubt encouraged by an ever increasing rise in mindless vandalism against the little railway. By 1970 he was so dispirited that he advertised the railway for sale but, fortunately as it turned out, there were no takers. However in 1977, following two spells in hospital, Matthew snr. announced his decision to retire. By this time the whole infrastructure of the railway was in an advanced state of decay. Most of the wooden structures were rotting or broken and the railway line itself was badly rusted and very rough

Following his father’s retirement, Matthew jnr. decided that forty years of history should not just disappear under the bulldozer and so began the rejuvenation of the railway. The earliest known photograph of KMR taken in 1936 showing the crowds the little railway attracted in those early days.

From the outset, Matthew decided to run the railway to a totally new business plan. His father had always relied on it for his livelihood but Matthew was a full-time teacher and so decided that with considerable help from friends and volunteers, he would run it as a hobby, ploughing any surplus cash straight back into the infrastructure.

Over the next few years, with considerable effort and a steady injection of cash the railway was transformed. Gradually the track was replaced, buildings renewed and engines and rolling stock either replaced or refurbished. A forty foot,stone-faced tunnel was added in 1983 on the site of the old Anderson shelter ‘tunnel’ which had rusted away some years previous. In 1989 the old wooden engine shed was hauled down and replaced by a sturdy steel and brick construction. The three lined shed lined up with a new turntable built some two years previously. In 1985, after a gap of some twenty five years, steam power returned permanently to the railway in the shape of ‘Firefly’. In 1995, Matthew fulfilled a long-held ambition by purchasing back ‘Big Bertha’, a magnificent steam powered Pacific locomotive, sold by his father back in 1960. Both of these engines still run on the railway whenever time and weather permits.

Following Matthew’s untimely death in April 2006 ownership passed to his wife Jill who at present runs the railway with son John. They have recruited a core of volunteers who continue to maintain and operate the railway. Thus a third generation Kerr will be running the “Wee Train” for years to come.

This concludes this very brief history of our railway. If you have found it interesting and would like to know more, there is a booklet available, written by Lawson Little (ISBN 0 9507 169 9 5) entitled ‘Kerr’s Miniature Railway – Scotland’s oldest small-scale line’. This can be purchased in some Arbroath bookshops or from us at the railway, please contact us for more details.